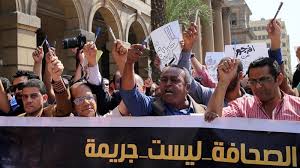 An Egyptian media outlet critical of the government of President Abdel Fattah el-Sisi says plainclothes police raided its headquarters in Cairo on Sunday.

Mada Masr, one of a shrinking number of independent news websites in Egypt, reported the raid in a tweet Sunday. It said nine officers entered the offices and confiscated phones and computers. It was unclear how many people were inside the office.

The officers also collected identity cards and “wrote the data of all those present,” but refused to reveal their own identities as they detained staff for three hours and then left with three employees, the online newspaper said.

A police spokesperson was not immediately available for comment on the developments.

The raid came a day after Mada Masr said security forces detained one of its editors, Shadi Zalat, at his home in Cairo early Saturday.