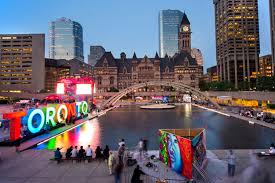 The City of Toronto welcomed 27.5 million visitors in 2018, a new report from Tourism Toronto says.

Across the greater Toronto region, that number climbed to 44.5 million visits, which brought in some $10.3 billion.

The report doesn’t factor in 2019 data, so you’ll have to wait until next year to see what kind of tourism spike major events like the Raptors championship had on the city.

So who’s coming? The report says domestic visitors accounted for 85 per cent of the city’s overall visits.

About nine per cent of the other visits were from Americans, while overseas visitors made up the final six per cent (although international visitors were the most likely to stay overnight.)