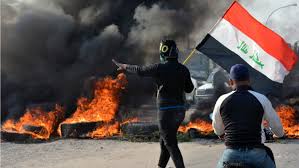 Thirteen anti-government protesters were killed Sunday by Iraqi security forces in one of the “worst” days of clashes in the country’s south, as protests swept through the oil-rich area, officials said. Demonstrators outraged by rampant government corruption and poor services burned tires and blocked main road arteries.

Security and hospital officials, who requested anonymity in line with regulations, said seven protesters were killed in the southern province of Basra, near the Umm Qasr port. Security forces used live fire and tear gas to disperse the protesters.

Earlier in Basra, which accounts for nearly 85 per cent of the country’s crude oil production, protesters burned tires in the city centre cutting main roads.

Officials said four protesters were killed in Nassiriya province, and one killed in both Najaf and Diwanieh provinces.

One security official in Basra said it was “one of the worst” days since the start of the protest movement. At least 150 protesters were wounded.

At least 342 people have died since demonstrations began Oct. 1, when thousands of Iraqis, mostly youth, took to the streets to decry corruption and poor services. The leaderless uprising seeks to overthrow the political establishment.